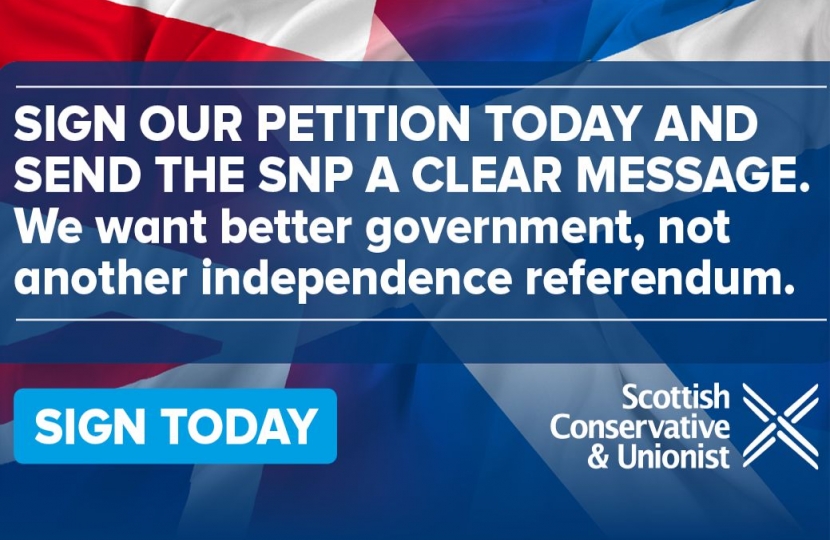 In an email to supporters today, party leader Ruth Davidson urges people to “join me in making sure the SNP listens for once” – following polls showing a clear majority opposed to a second vote on independence.

The petition – which can be found at www.scottishconservatives.com/no2indyref ​– comes after Nicola Sturgeon promised only this April that she would not revisit the referendum question unless opinion changed.

A new poll today reveals that there is no increase in support for independence, and even less backing for a referendum.

In a letter to supporters today, Ruth writes:

“As leader of the main opposition party, I will demand every day that we get the government focussed back on what matters.

“And you can join me today by signing our petition, saying no to a second referendum. Already, thousands of Scots have signed up. Join them –  and me – in making sure the SNP listens for once.

“Together, let’s demand the government we deserve: one that focusses on the day job, not a divisive, unwanted second referendum.”

The Scottish Conservatives are today also highlighting the SNP’s broken promises on the independence referendum today.

Prior to the independence referendum, Nicola Sturgeon said the vote would be “once in a generation” – but has now dumped that pledge.

Prior to the Scottish elections in May, Nicola Sturgeon said she would not return to a referendum if there was no shift in opinion – but has now gone back on her word.

And for the last four years, the SNP has insisted that the UK pound is the best option for Scotland – only today to launch a new commission which will examine other currency
options for an independent Scotland.

Ruth added: “The SNP’s record on independence over the last five years has been one of evasion, downright lies and broken promises.

“This is a party which will say or do anything to keep its separation obsession alive.

“People in Scotland have had enough: the SNP should drop the obsession with independence and get back to the job we pay them to do.”

Nicola Sturgeon is breaking her promises from the 2014 independence referendum

The SNP today has said it will revisit the question of an independent Scotland’s currency. But Nicola Sturgeon – and her new adviser Andrew Wilson – have made it clear that they believe Scotland should remain in a currency union.

In January 2014 he wrote a column backing the shared pound, saying that in ‘the best outcome sovereignty is shared’ and that Mark Carney’s review of what Scotland would need to do to share the pound was sensible and compared to other options was ‘definitely’ worth it (Andrew Wilson, The Scotsman, 2 February 2014)

The SNP announced it is starting up a new “fact-checking” service to monitor the accuracy of research and political statements. Many people in Scotland will be wondering if the SNP will be fact-checking the cost of its new independence blueprint.

Residents sick and tired of IndyRef2

I have been putting out Ruth Davidson's latest No to Indyref2 leaflet across Port Charlotte, Portnahaven and Port Wemyss the last few days.

Dunoon and Cowal Councillors Bobby Good and Yvonne McNeilly have been getting out and about in their wards speaking to local people.

People in Scotland benefited from a Union dividend of £1750 per head last year, according to new figures released today on Scotland’s finances.

This is an increase on the £1600 boost set out in last year’s Government Expenditure and Revenue Scotland (GERS) figures.

Labour can't be trusted with the Union

Labour can’t be trusted to prioritise Scotland’s place in the UK. Kezia Dugdale made a speech in London calling for a new Act of Union to preserve the future of the UK.

A draft bill for a second referendum on Scottish independence shows that Nicola Sturgeon has given up being a First Minister for all of Scotland.

The SNP are planning to speak to voters up and down the country who voted no in the independence referendum and to listen to our concerns about separation from our United Kingdom.

With recent news that the Scottish economy is flat-lining, unemployment rising and generally performing worse than the rest of the UK, is there any chance that our First Minister will turn her attention to the job in hand.