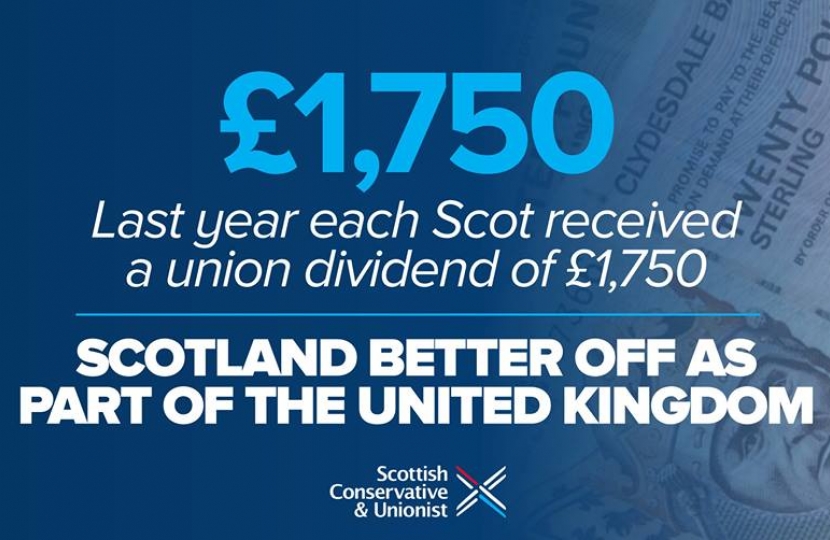 People in Scotland benefited from a Union dividend of £1750 per head last year, according to new figures released today on Scotland’s finances.

This is an increase on the £1600 boost set out in last year’s Government Expenditure and Revenue Scotland (GERS) figures.

It means the Union dividend is the greatest since GERS records began in 1998.

The new figures also expose the scale of the SNP’s deception prior to the 2014 referendum, when it insisted a Yes vote would boost prosperity.

In fact - for the first year of what would have been independence Scotland ran a deficit of 8.3% – higher than any EU member state, and double that of Spain, the next highest.

The SNP claimed that, in 2016-17, Scotland would earn between £6.8 billion and £7.9 billion from oil taxes, helping to sustain spending on schools and hospitals.

“Today’s figures confirm the facts - Scotland is better off as part of the United Kingdom.

“All of us last year received a Union dividend of £1750 per head.

“The truth is that when times are tough – as they have been in Scotland over the last few years – we can rely on the weight of the whole UK to ensure schools, hospitals and public services remain decently funded.

“These figures also confirm just how wrong the SNP got it during the referendum campaign.

“In 2014, Alex Salmond and Nicola Sturgeon looked Scottish families in the eye and insisted we’d be better off.

“In fact, in the first year of independence, Scotland would have been staring at the biggest deficit in Europe.

“The task ahead is clear.

“Rather than banging on and on about independence, Nicola Sturgeon must focus on using the huge powers at her disposal to try and build up Scotland’s economy, so we close the gap between the amount we spend and the amount we earn.

“And she should have the humility to accept where she got it wrong.

“These figures confirm that her independence day – set for March 2016 – would have been our insolvency day.

“That is the bullet we dodged by voting No.”