Maurice joined the British Army in 1972 serving initially with the 51st Highland Volunteers part of the Territorial Army. Captain Corry was awarded the Efficiency Decoration in 1984, a first clasp to the medal in February 1994 and a second clasp in 1997. He was promoted to major in June 1984. Major Corry was transferred to the Black Watch in February 1995. He retired from the Royal Regiment of Scotland in September 2009.

Rest and Be Thankful consultation must deliver permanent solution

Scottish Conservative representatives have called on the SNP Government to ensure that a permanent solution is finally found for the Rest and Be Thankful.

The Coronavirus pandemic restrictions on public gatherings made it difficult to hold commemorations to mark the end of World War 2 on 15 August, but a small Act of Remembrance Service was held at The War Memorial in Christie Park, Alexandria to mark the 75th anniversary of VJ Day.

Argyll and Bute Conservative representatives have slammed the SNP's continued lack of urgency to find a permanent solution to the problems that continue to engulf the Rest and Be Thankful.

Businesses continue to be ‘left behind’ by grant process

West of Scotland MSP Maurice Corry today expressed concerns firms in Argyll and Bute continue to be left behind by SNP grant schemes as new data reveals even more businesses have been left waiting on vital funding support.

West of Scotland MSP Maurice Corry has welcomed the decision for schools to return full time in August.

The learning support system throughout our primary and secondary schools is well established, ensuring those requiring additional help get it.

There are many modern challenges facing people in all walks of life, the causes of which are not yet fully understood. Social and financial pressures contribute, as does social media pressure to keep up with one another.

Boris Johnson MP has received many warm congratulations on his success in the Conservative leadership election, becoming the new prime minister today.

On the one hundredth anniversary of Armistice Day, members joined in with local commemorative events across the country. 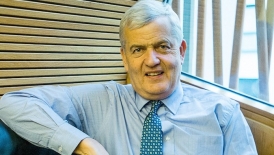