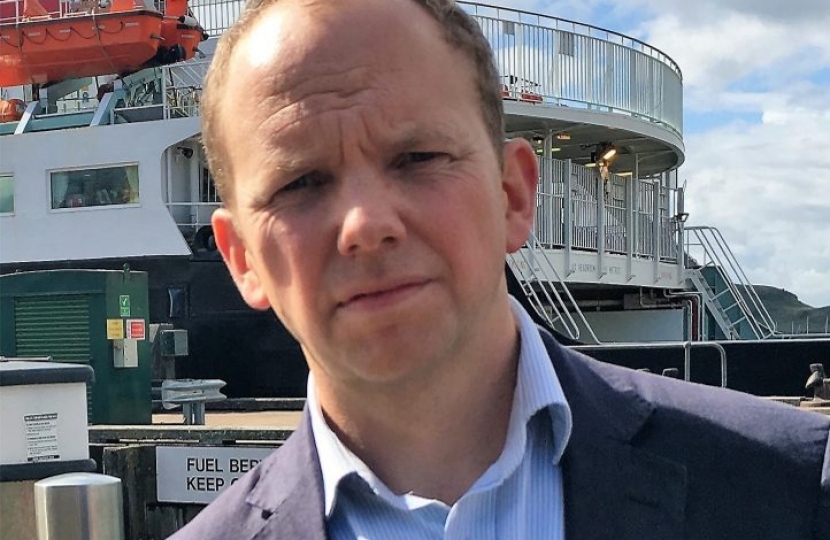 Highlands and Islands MSP Donald Cameron has said that island communities in his region will be counting the cost of the disastrous mismanagement of the procurement of new ferries.

The Scottish Conservative MSP made his comments after a Holyrood probe described the process,  which will result in the two new CalMac hybrid ferries being delivered two years late and at twice the original cost, as a “catastrophic failure” calling for a “root and branch overhaul” of the approach to the procurement of new vessels in Scotland.

The Scottish Parliament’s Rural Economy and Connectivity (REC) Committee, which launched an inquiry in October 2019, has demanded an independent review of the ferry procurement process after concluding that the established procedures are “no longer fit for purpose”.

The inquiry was launched shortly before the Scottish Government’s decision to take Ferguson Marine Engineering Limited (FMEL) into public ownership following delays in the delivery of the two new hybrid ferries being built at the Ferguson Marine shipyard.

MSPs were seeking to establish what lessons could be learned for the future procurement and construction of new ferries after it emerged that the cost for the completion of vessels 801 and 802 had risen from an initial fixed price of £97m to between £192.8 million and £196.8 million, with the delivery of the ships delayed from 2018 to 2022 and 2023 respectively.

Mr Cameron said: “Hot on the heels of the BiFab disaster, we now have this confirmation of the calamitous mismanagement of the ferry contract by SNP ministers and their agencies.

“It will be our island communities who end up counting the cost, in terms of the lost jobs and lost opportunities that goes with an inadequate lifeline ferry service.

“Frankly, it amounts to a betrayal.”

In a 129-page report published today, the Committee said the evidence exposed a “lack of robust due diligence” on the part of procurement agency Caledonian Maritime Assets Ltd. (CMAL) in assessing the financial stability of FMEL and its capabilities in areas such as project management and design. It was also critical of the Scottish Government’s apparent willingness to proceed despite the apparent significant risks in awarding the contract to the company.

Following the contract award, insufficient work was undertaken by the contractor to develop and secure sign-off on the basic design before commencing construction of the vessels, and thereafter it failed to manage the design iteration process effectively – resulting in delays and cost overruns.

The Committee said it was appalled to learn that CMAL was legally bound to continue to make milestone payments on the contract despite ongoing concerns about the performance of the contractor, adding that there was strong evidence that FMEL deliberately proceeded to construct specific sections of the vessel either out of sequence or not according to the proper specification, purely as a means of triggering payments.

It therefore urged the Scottish Government to take action to ensure that future contracts achieve the most appropriate balance between cash flow and risk and include more robust safeguards to prevent payment for work that has been completed out of sequence or otherwise contrary to the agreed terms of the contract.

The report also called on Audit Scotland to undertake a separate review of the financial management of the contract by CMAL and the role of Transport Scotland in the process, adding that it would be in the “public interest” for this investigation to take place as soon as possible.

The inquiry highlighted concerns about what the Committee considered to be the “complete lack of transparency” surrounding the purpose, agreement and payment of commercial loans totalling £45m to FMEL by the Scottish Government. It is also concerned that there was no effective monitoring or oversight of how the loans were subsequently spent by FMEL. The Committee called on Audit Scotland to investigate the processes followed by the Scottish Government in granting and administering these loans to FMEL.

MSPs further considered that the decision-making procedures for the procurement of ferries in Scotland is “cluttered” and suggested a root and branch overhaul should consider how these structures can be streamlined, including the possibility of merging or abolishing certain bodies.

“The evidence to our inquiry into this fiasco has revealed that all parties involved must share in the responsibility for the catastrophic failure to deliver this contract on time or on budget. A lack of due diligence, poor project management and a failure by all parties to take the necessary action to resolve problems as they emerged, means that cost of the contract has increased from £97m to almost £200m while the island communities who are relying on these ferries to be delivered continue to suffer.

“Our report calls on the Scottish Government to commission an independent external review of the processes for public procurement of ferries to ensure appropriate lessons are learned for the future. This review should consider the robustness of financial due diligence, the processes for assessing the technical capabilities of bidders, and the design development and sign-off procedures, investigating precisely how such a situation could have arisen and to ensure such errors are never repeated.

“The Committee acknowledges that existing processes for procuring new ferries to serve the Clyde and Hebrides ferries network have, in the past, resulted in new vessels being delivered on time and on budget. However, based on the evidence it has received, the Committee believes that there has been a catastrophic failure in the management of the procurement of vessels 801 and 802, leading us to conclude that these processes are no longer fit for purpose and that a complete overhaul is needed. That could include merging or even abolishing certain bodies currently involved in decision-making on ferry procurement.”