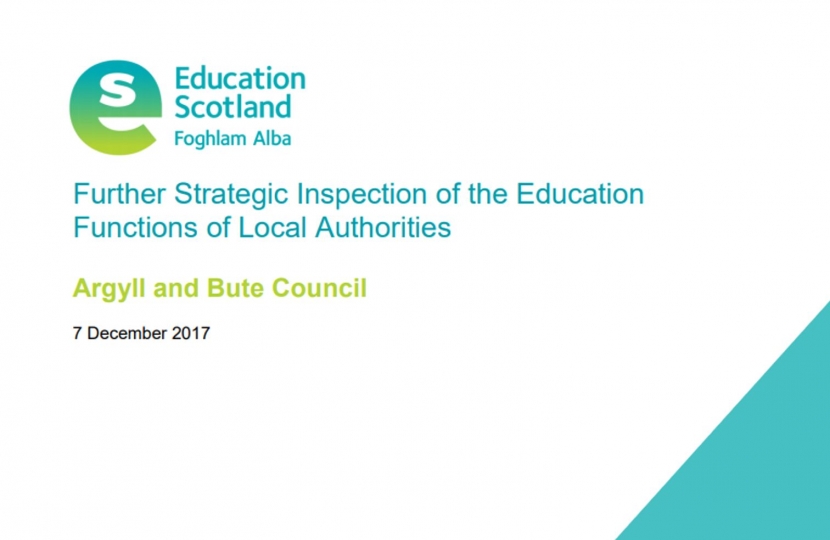 A new report has shown the quality of school education in Argyll and Bute Council to have made “positive progress” since it was first reviewed back in March 2017.

The strategic inspection report, conducted by Education Scotland, has shown the authority to make drastic improvements in a number of different categories, following a report release at the beginning of the year which noted that there were “significant challenges identified”.

The evidence shows that attendance rates in Argyll and Bute are above the national average, while school exclusions are below the national average. In addition, the authority has shown greater leadership and has significantly improved the recording, storage and analysis of performance data, with staff now more aware of improvements required and pupils happier with their education experience.

The report has been welcomed by senior Scottish Conservative figures, as it is the first major document showing real, tangible successes since the party became the lead grouping in the council administration.

“I am delighted that Education Scotland have acknowledged and commended the improvements that staff across the council have made in order to get our education system back on track, following a very poor report in March.

This is a clear sign that leadership is being shown by our officers, staff and those working in the administration, which the Scottish Conservatives are a proud part of.

We now need to take this report and continue to implement the further improvements it suggests, but this is an significant step in the right direction, and will benefit pupils in the long run.”

“We strongly welcome the findings in Education Scotland’s report and this is a clear sign of the impact that the Scottish Conservatives have had since coming into the administration of Argyll and Bute Council.

The report from March was a clear wakeup call and we are delighted that the council have taken the bull by the horns and worked extremely hard to get to this point.

With a clear plan and leadership, we know that education in Argyll and Bute will go from strength to strength.