Frank’s Law must be part of Sturgeon’s autumn relaunch 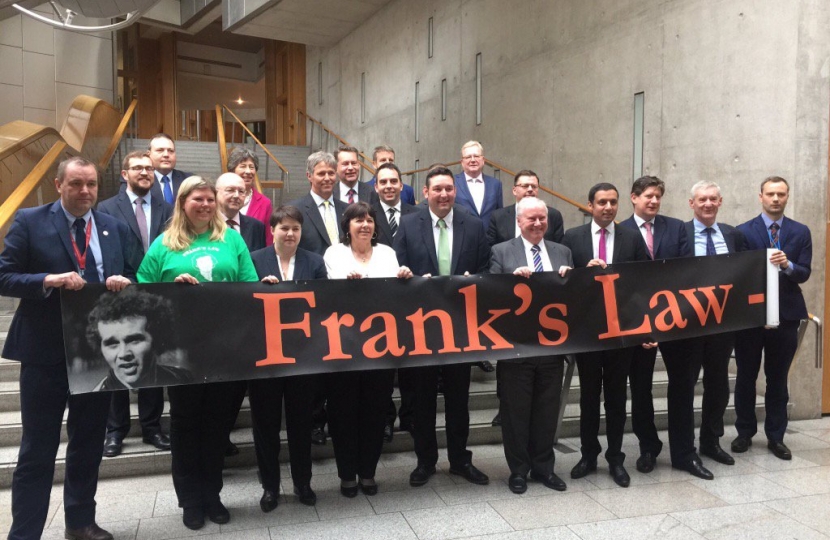 The introduction of Frank’s Law must be a key part of the SNP’s supposed “radical relaunch” ahead of the new Holyrood term.

Nationalists claimed earlier in the summer that they were ready to ditch their agitation on independence and start focusing on running the country.

Now shadow health secretary Miles Briggs has written to Nicola Sturgeon demanding she introduces legislation to ensure those with conditions like dementia, but happen to be under the age of 65, are given equal access to free personal care.

A majority of MSPs in the Scottish Parliament support the campaign, and Miles already has a member’s bill on the subject.

In his letter, he said if the SNP was serious about creating a fairer society in Scotland, the enacting of Frank’s Law should be a priority.

Scottish Parliament business resumes on September 5, with ministers under pressure to make more use of the powers available to them after a year of inactivity.

Frank’s Law is named after former footballer Frank Kopel, who was diagnosed with dementia at the age of 59 and passed away in 2014.

“Nicola Sturgeon always claims she wants to create a fairer society in Scotland.

“There would be no better way of demonstrating that than ending the unfair age discrimination currently faced by those with conditions like dementia, but happen to be under 65.

“The SNP has briefed the media about a radical relaunch, amid accusations of neglecting the day job for the past decade.

“If that’s to happen, the introduction of Frank’s Law should be one of the top priorities.

“There is a majority of MSPs at Holyrood in favour of this, and it’s time the First Minister recognised this.

“If the Scottish Government doesn’t move on this urgently, my member’s bill will carry on and seek to put an end to the current inequality that exists.”

The SNP said it was set for a radical relaunch this summer:
http://www.scottishconservatives.com/2017/07/snps-radical-relaunch-doesnt-include-a-single-new-policy-2/

For more information on the campaign, visit:
http://frankslaw.org/