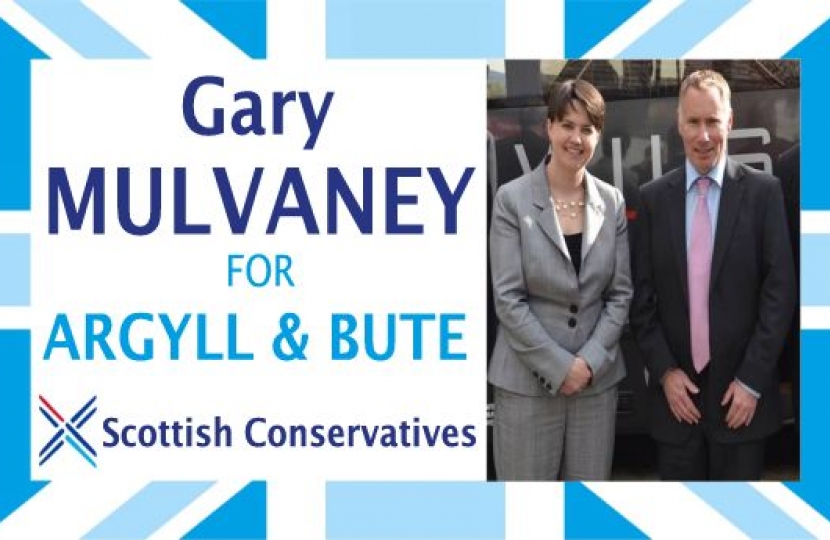 Gary is currently Conservative Group Leader on Argyll & Bute council and was re-elected for the fourth time with largest first preference vote for any candidate in the authority. During these elections, the Conservatives gained 5 seats becoming the second largest political group on the council.

Association Chairman, Sandy MacPherson said "I am delighted that GARY MULVANEY has been adopted as our candidate.   Gary is a most able and experienced candidate who will conduct a vibrant campaign.

Buoyed up by the Local Government Election results, we look positively on the prospect of regaining the constituency, and the assistance of our members and supporters will be welcomed."

By profession Gary is a chartered certified accountant and currently works in the motor trade for an SME company. He is married to Janet and they have one daughter, Sammy Jo.

Commenting on his selection Gary said “We did incredibly well in these council elections, finishing just 900 votes behind the SNP total. My job in these next four weeks is to make sure we cross the line as winners and ensure the threat of indyref2 is off the table.

I would urge Lib Dems, Labour and unionists alike to rally around the Conservatives, as the only party than can defeat the SNP. Today in Argyll & Bute, it is a two-horse race and as the council elections proved, the Lib Dems are not in the running.”

MUST WATCH: At last night’s STV debate, the First Minister revealed a private conversation with Kezia Dugdale, in which the Labour leader said her party would SUPPORT another independence referendum.

Been a wet but productive day in Lochgilphead.

Only Gary can beat the SNP

It was a great day campaigning today, with an interview with BBC Alba and then the hustings.

It was evident that unionists aren't supporting the Lib Dems because of their stance on re runs of referendums, which plays into the hands of the SNP.

Back in Oban today, great to hear ex Lib Dem voters are backing myself on Thursday as the best person to return Argyll & Bute a unionist MP, secure jobs and investment to grow our constituency... we are predicted only to be 0.2% behind the SNP by Electoral Calculus

Support for the Union in Helensburgh

Wonderful support in Helensburgh today for myself and the Conservatives.

To support the Union and for the best for Argyll & Bute please vote for myself on Thursday 8th June.

Only 2 parties can win

Electoral Calculus shows Argyll & Bute has only 2 parties that can win... the SNP or Conservative.

If you want strong, unionist representation then please back me and vote Gary Mulvaney and the Conservatives

Campaigning continued in Dunoon today, where Gary and the team were out meeting local people.

Gary also participated in the Dunoon hustings, talking about why voting Conservative is the only way to defend the Union.

Strengthen Scotland in the UK

Argyll and Bute truly is a beautiful constituency, one in which would be a great honour to represent.

Taking advantage of the beautiful morning, Gary campaigning in Tobermory speaking with locals and visitors enjoying the lovely weather on this bank holiday weekend.

Conservative Westminster candidate, Gary Mulvaney was in Mull today to take part in the local hustings debate, with other candidates.

Gary said "It was great to speak this evening on Mull at the Hustings, getting the chance to meet some local residents and business owners.